Our stop for today was the seaport of Kusadasi, access point to the ancient seaport of Ephesus. The area has been a center of art and culture since some of the earliest recorded history, and has been settled by many civilizations since being founded by the Leleges people in 3000 BC. Later settlers include the Aeolians in the 11th century BC and Ionians in the 9th. Originally, seamen and traders built a number of settlements along the coastline, including Neopolis. An outpost of Ephesus in ancient Ionia, known as Pygela, the area between the Büyük Menderes (Maeander) and Gediz (Hermos) rivers, the original Neopolis, is thought to have been founded on the nearby point of Yılancı Burnu. Later settlements were probably built on the hillside of Pilavtepe, in the district called Andızkulesi today. Kuşadası was a minor port frequented by vessels trading along the Aegean coast. In antiquity it was overshadowed by Ephesus, until Ephesus' harbor silted up. From the 7th century BC onwards the coast was ruled by Lydians from their capital at Sardis, then from 546 BC the Persians, and from 334 BC, along with all of Anatolia, the coast was conquered by Alexander the Great. From that point on the coastal cities in Anatolia became a centre of Hellenistic culture. During the daytime, I took a stroll through town, a typical vacation seaport in any of the world. 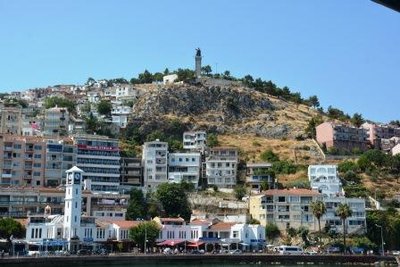 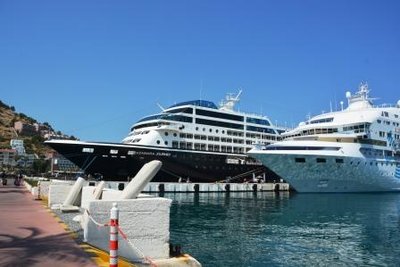 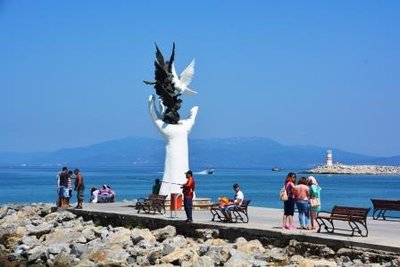 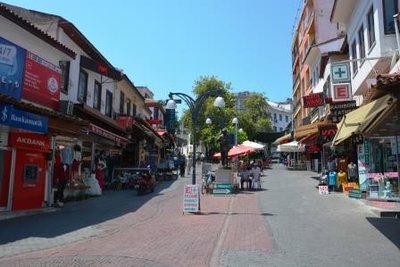 At 7:00pm, we left the cruise terminal for our Azamazing event - a classical concert in the Odean Theater of Ephesus.
It was built in the 10th century BC on the site of the former Arzawan capital by Attic and Ionian Greek colonists. During the Classical Greek era it was one of the twelve cities of the Ionian League. The city flourished after it came under the control of the Roman Republic in 129 BC. According to estimates, Ephesus had a population of 33,600 to 56,000 people in the Roman period, making it the third largest city of Roman Asia Minor after Sardis and Alexandria Troas. The city was famed for the Temple of Artemis (completed around 550 BC), one of the Seven Wonders of the Ancient World. In 268 AD, the Temple was destroyed or damaged in a raid by the Goths. It may have been rebuilt or repaired but this is uncertain, as its later history is not clear. Emperor Constantine the Great rebuilt much of the city and erected new public baths. Following the Edict of Thessalonica from Emperor Theodosius I, what remained of the temple was destroyed in 401 AD by a mob led by St. John Chrysostom. The town was partially destroyed by an earthquake in 614 AD. The city's importance as a commercial center declined as the harbor was slowly silted up by the Küçükmenderes River. Ephesus was one of the seven churches of Asia that are cited in the Book of Revelation. The Gospel of John may have been written here. The city was the site of several 5th century Christian Councils. It is also the site of a large gladiators' graveyard,
The Odeon theater has the shape of a small theater with the stage building, seating places and the orchestra. It had double function in use. First it was used as a Bouleuterion for the meetings of the Boulea or the Senate. The second fuction was the Odeum as a concert hall for the performances.It was constructed in the 2nd century A.D by the order of Publius Vedius Antonius and his wife Flavia paiana, two wealthy citizens in Ephesus. It had a capacity of 1500 spectators. It had 3 doors opening from the stage to the podium. The podium was narrow and one meter higher than the orchestra section. The stage building was two-storied and embellished with columns.The podium in front of the stage building and some parts of the seating were restored. The Odeon used to be enclosed with a wooden roof.

Our performers tonight were members of the Camerata Izmir Orchestra, and they played works by Handel, Bach, Boccherini, Borodin, Mozart, Gardel and Brahms. It was spectacular and the acoustics of the theater was amazing. 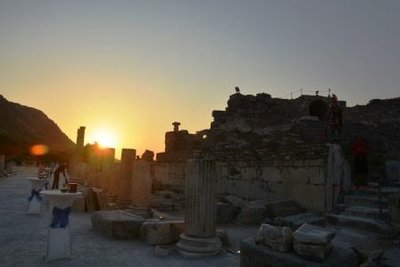 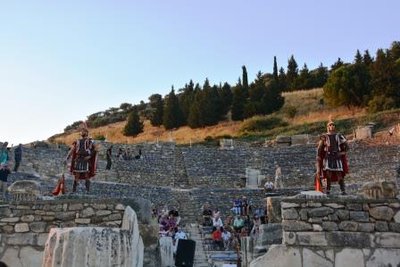 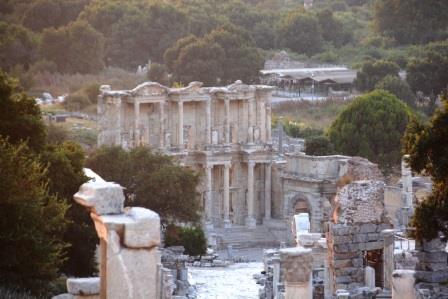 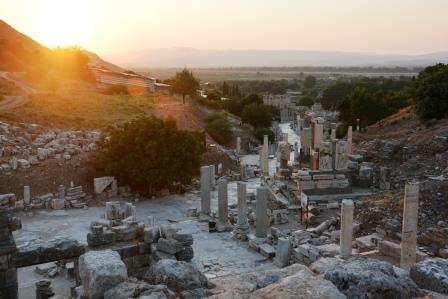 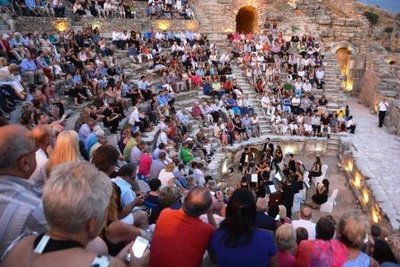 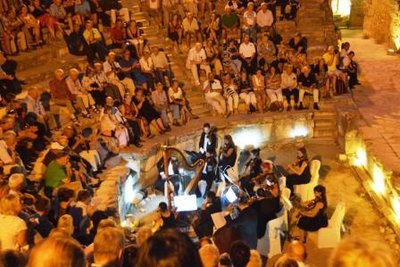 Posted by rpickett 07:09 Archived in Turkey Tagged and ephesus kusadasi