There are no words to describe the Terracotta Warriors. The site is far more impressive than I imagined. More than 2000 years old, the warriors remained buried until the 1970's when a farmer looking to dig a well found some fragments and sent them to the state. The state figured out there age and paid the farmer about 45 Yuan for his efforts - about a months wages. Today, it is truly the 8th wonder of the world. Through the use of ground sonar, they have found three different pits and are slowly both excavating and putting the warriors back together, as the whole display was destroyed and set on fire by invaders during the fall of the dynasty. This process is ongoing and will take perhaps another hundred years to complete. The Emperor's tomb remains untouched, but the local guide has said there is talk of a dig in a portion of it.

After spending three hours at the site, we headed to the airport for our flight to Chongqing and boarding the Viking Emerald. The flight was a little late due to ground control. I got the feeling that the Chinese air traffic control system is pretty outdated due to the long interval between take-offs.

For some reason, I expected Chongqing to be a smaller river city - I was wrong - 35 million people. After a while you become overwhelmed by the shear number of people and the number of apartments that it takes to house that many people. There were a number of apartments under construction in all the three cities that we have visited, but none seemed to have anyone working on them. Maybe they are just reserve housing??? 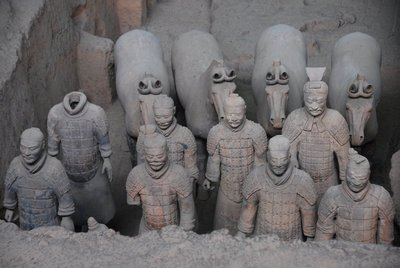