Today the tour was to the Three Gorges Dam. We decided not to go because it was foggy - very typical for the gorges region, they don't get much sun during much of the year - and because all you really do is look out over the dam and the lake. They don't let you in the dam like they do at the Hoover Dam in Las Vegas.

The dam is 2000 meters long (6556 feet) and costs about $21.8B to build. It raised the water level in the Yangtze and it tributaries by up to 100 meters. It generates 18,200 megawatts of power. 326 towns and 19 cities were affected by the dam requiring 1.13 million people to be relocated. Many chose to relocate to the cities, rather than into the new housing that was built to accommodate those that were affected. The resulting reservoir is 326 miles long.

In the afternoon we set sail again and went through the Xiling Gorge, the largest of the three Yangtze River Gorges 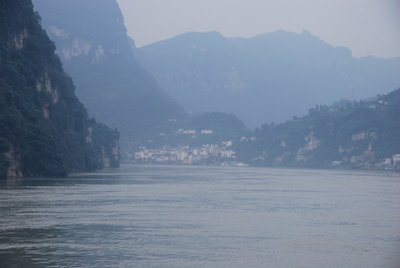 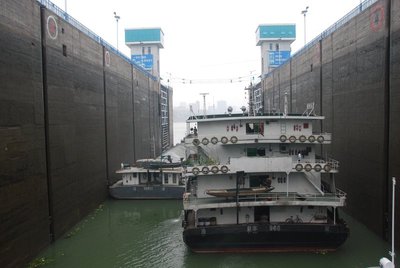 A quite night on board as we continued down the river