Our adventure ended today, and we were efficiently transferred to the Shanghai airport - one of the most modern and efficient that I have been in. The plane flights home were on time and I was back in Charleston on time in the early evening. A bonus - my bag was the first one off the baggage claim.

This trip was perfect in just about every way. China is a different world from what we are used to in North America - it's an amazing mix of Western culture and traditional feudalism. Instead of welfare, the state finds jobs for folks and they seem to be willing to work for very modest wages. There were numerous gardners, street sweepers and trash picker-uppers everywhere each in a different uniform, performing their chores with some diligence and unknown satisfaction. What we don't get is the sheer number of people in China - especially in the big cities. We may think LA and NYC are big, but they are dwarfs in comparison to some Chinese cities. If you havn't seen it, it is hard to imagine the number of appartment buildings it takes to hold 35,000,000 folks - NYC is only about 9 million folks. The state has created 'residential areas' where most of the city inhabitants live or are moving to, and the apartments go on and on and on...

What really made this trip special was the care and attention of our Tour Guide Francis Ying - professional and courteous in every sense of the word, he made this trip flawless. The was the consensus of our entire 34 person group. We couldn't thank him enough. 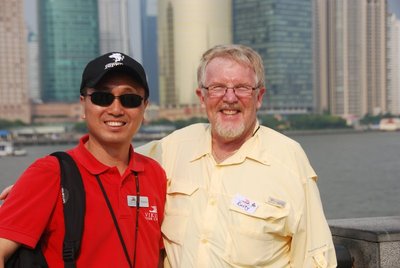 Now to processing more than 500 photos, which I will have up on the web in an album for viewing - stay tuned.

Next up - Ireland in late August!

Posted by rpickett 11:16 Archived in China