Killkenny to Dublin and the Game

We got off early from Killkenny as we wanted to make sure we beat any traffic that might have been around Aviva Stadium for the Notre Dame Navy football game. When we got the the hotel - only a few blocks from the stadium - it was the typical game day atmosphere at any college campus. Navy and Notre Dame fans were everywhere, as were burgers, beer, and game day vendors. There was a buzz in the air for sure and the weather was a perfect fall football day - clear and mid 60's. Navy was the home team, and they had brought over more than 1000 Midshipmen who did a full march on to the delight of the crowd. The Notre Dame band did the halftime show, which was a tribute to the traditional music of Ireland. The game itself was not close. Notre Dame was much stronger than Navy and easily won 50 - 10. I am not sure this particular game says anything about either team - only time will tell. At the completion of the game both teams assembled together out of respect for each other during the playing of Navy Blue and Cold and Notre Dame Our Mother. It's a great rather new tradition of this rivalry. We met up with some friends for dinner at the hotel, and were looking forward to a good nights sleep. 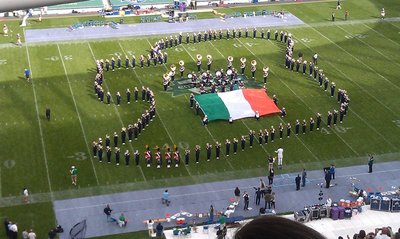