We are settled in to the Embassy Suites on 17th Street in Fort Lauderdale watching the NFL championship and waiting for happy hour at 5:30pm. Sorry to all of you in the north, but it is a sort of cloudy 78 degrees out. Much better than most of the rest of the country. The trip should be fun, as we are in a sunset veranda - aft facing on the aft end of the seventh deck. Highlights include two dives - one in Grand Cayman and a second dive in Belize. Both are great dive spots. The only other shore excursion that we have scheduled at the moment is a trip on a domed train car across Panama, paralleling the canal. Hopefully we will be able to see some of the new dig!

Here is a photo from the 11th floor of the hotel facing the 17th street causeway with a Princess ship at the terminal. As it is Sunday, there are a bunch of ships in including the Allure of the Seas, several Holland America ships and at least one Carnival ship. 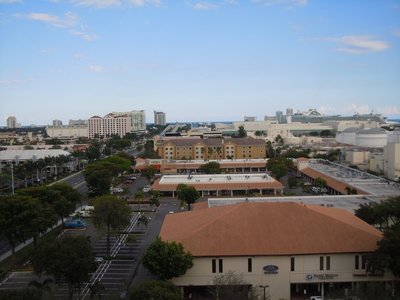 Cocktails, dinner, some more football and Downton Abbey - about as good as it gets!

Posted by rpickett 12:36 Archived in USA