We woke up to fog and mist as we were well at sea. The fog started about 0345 as we started hearing the mandatory ship's fog horn every three minutes or less (required by COLREGS - International regulations for the prevention of collisions at sea). The Alaska travel guides say that there should be quite a bit of wildlife including Orka's but we struck out, though, except for various sea gull type creatures, we may have seen some puffins swimming avoiding the ship. We started the day with Breakfast in Sabatini's - one of our suite perks and then lounged around reading and relaxing - maximizing our naps as we adapt to life at sea. After talking to several clients who are also on board, I think at least two naps is the order of the day. It was formal night on board, but we opted out of that tradition preferring to head to the buffet. There was a good selection of fresh preparations, and we enjoyed a relaxing dinner. After that - we headed back to the cabin to watch whatever we could see of the sunset and then off to bed - still trying to catch up on sleep, missed on travel from the east with three time zone changes. Tomorrow, we arrive in Ketchikan for a rather brief stay as we get underway at 2:00pm local (Alaska) time - four hours behind the east coast.

Movies under the Stars 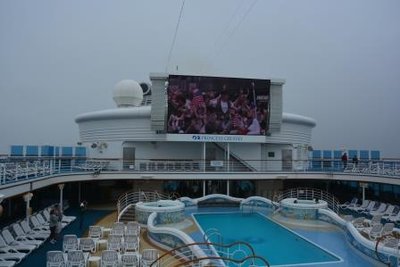 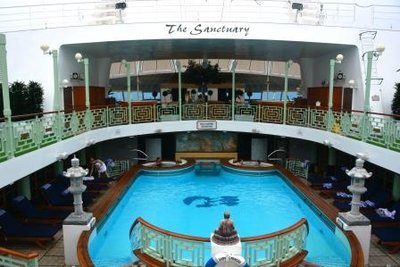 The fog and mist on a flat calm sea 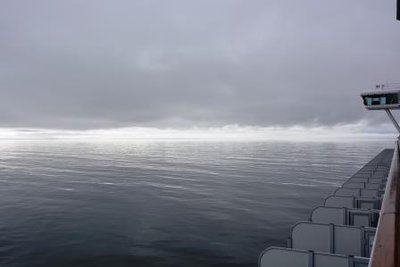 What's your cabin #, you got with the upgrade?