It's official - it's a long way from Charleston, South Carolina to Johannesburg, South Africa. We flew from Charleston to Dulles and had about a four hour layover in the International wing of Dulles. It was quite nice as there were surprisingly few people. After lunch, we headed to the Lufthansa club, which was hosting business class from South Africa Airlines. We ended up riding in the elevator with some old friends from my Navy days, who were on there way to St. Petersburg Russia for a rivercruise on the Volga (I will be doing that trip in August of 2014). We had a great time swapping old navy stories and catching up on mutual friends for a couple of hours until they had to board their plane. We boarded our A340-300 on time and took off for the first leg of our air journey to Dakar Senegal, where some folks were getting off and the plane was refueled. After about an hour on the ground - no one was allowed to get off because Senegal is on the WHO list of Yellow Fever countries. The second portion of the air leg was another 8 hours or so. The bottom line, is that we got on the plane in Dulles at 5:00pm eastern time, and got off the plane at 5:15pm Johannesburg time (which is six hours ahead of east coast time. Even in business class, it was a long flight. We were somewhat concerned that there would be a hassle about yellow fever vaccination certification (neither of us had any!), but yellow fever never came up during the whole process. Our bags were among the first to come off, we breezed through customs and immigration, and our driver was waiting for us for our 30m minute trip to our hotel. Like always a good shower and dinner were in order, before turning in for the night. Tomorrow is trip to Pretoria in the afternoon as we continue our battle with jet lag! 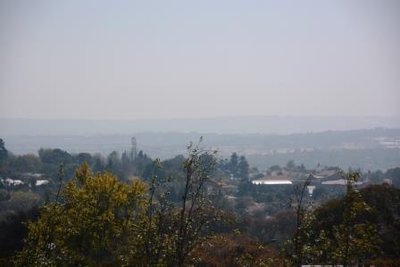