We arrived in Ireland on a typical day rainy and chilly, but by the end of the day the weather was superb and Ireland offered us a great surprise.

We boarded the bus and drove to the city of Cork for a drive around. The city is situated on the River Lee which splits into two channels at the western end and divides the city centre into islands. They reconverge at the eastern end where the quays and docks along the river banks lead outwards towards Lough Mahon and Cork Harbour, which is one of the largest natural harbours in the world by navigational area. Expanded by Viking invaders around 915, the city's charter was granted by Prince John, as Lord of Ireland, in 1185. Cork city was once fully walled, and the remnants of the old medieval town centre can be found around South and North Main streets. The city's cognomen of "the rebel city" originates in its support for the Yorkist cause during the English 15th century Wars of the Roses. Corkonians often refer to the city as "the real capital" in reference to its role as the centre of forces opposing the Anglo-Irish Treaty during the Irish Civil War. 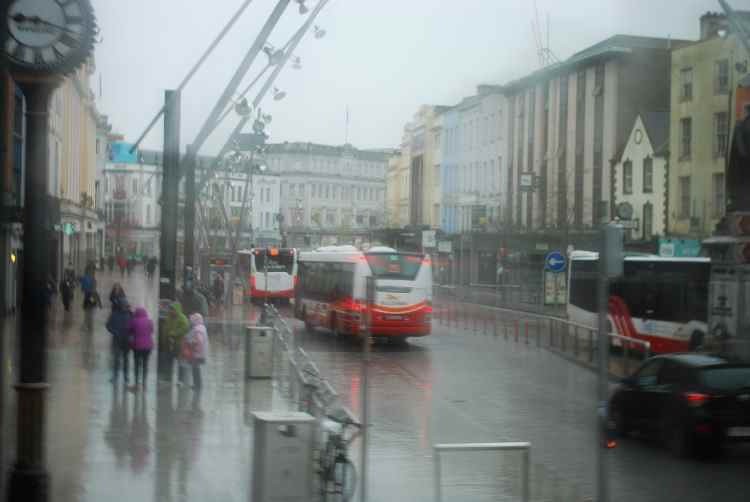 Our next drive was to the town of Midleton, where John Jameson and sons moved his distillery from Bow Street in Dublin. "For over 200 years we called Dublin home, but in 1975 we moved our ever expanding operation to the green expanses of Midleton, Co. Cork. The big move wasn’t without risk, but the migration certainly paid dividends in the whiskey making department. Our new home provided the space we needed to stretch our legs and our whiskey making ambitions, proximity to barley farmers and freshwater probably aren’t what people typically look for when house hunting, but Midleton seemed to have everything we need as well as the extra space for visitors." Since I drink Jameson, this was a wonderful experience! 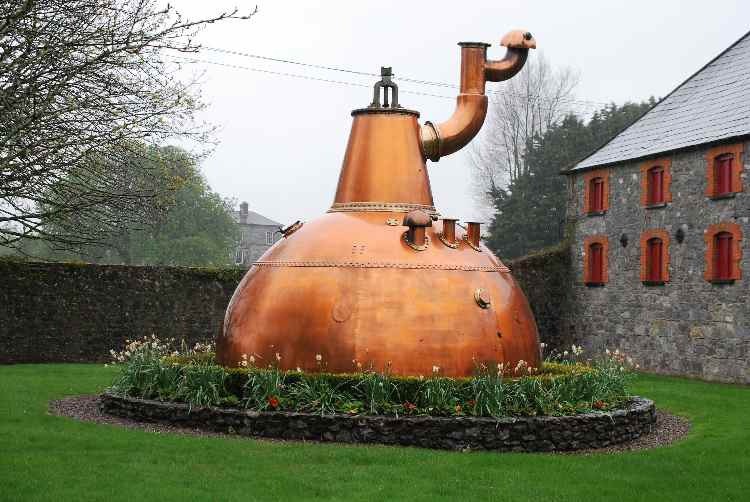 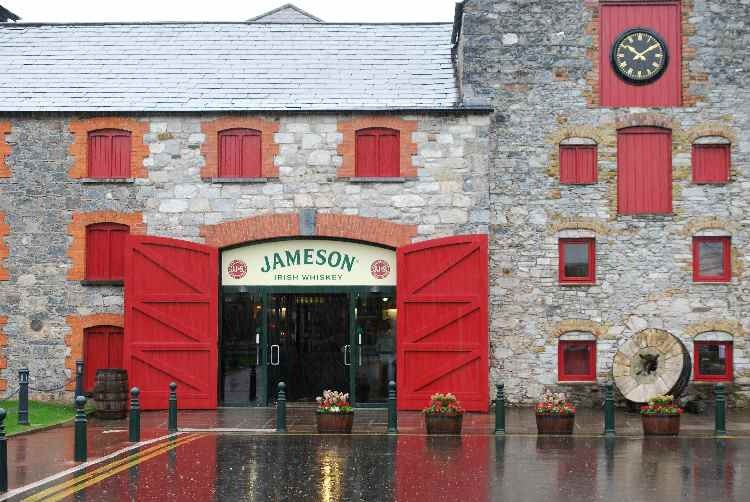 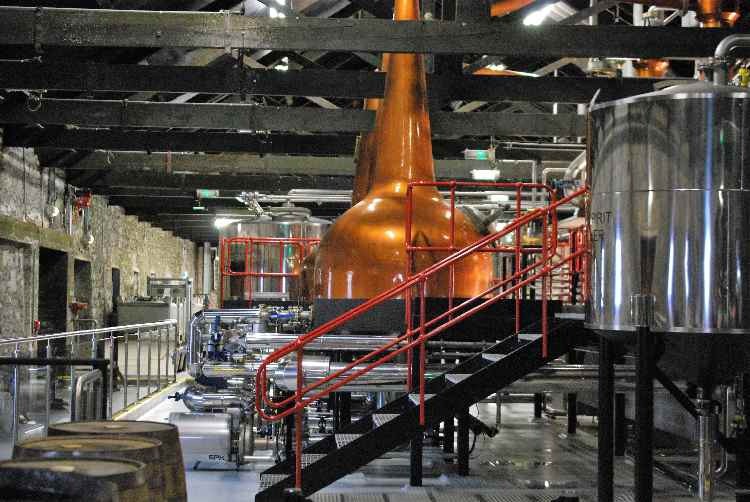 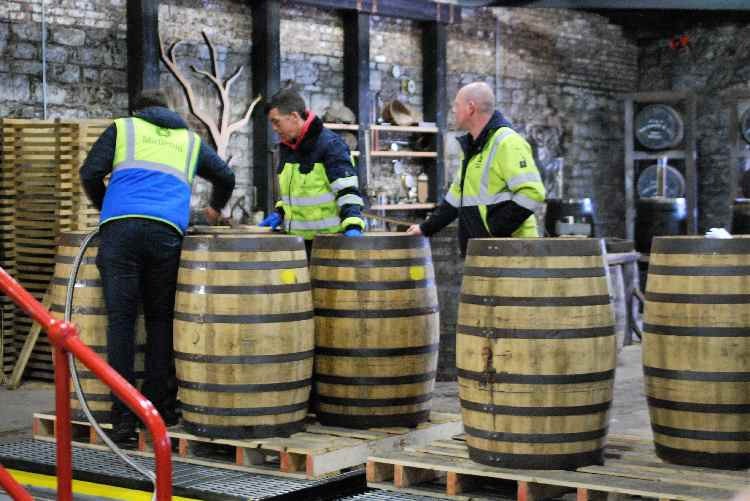 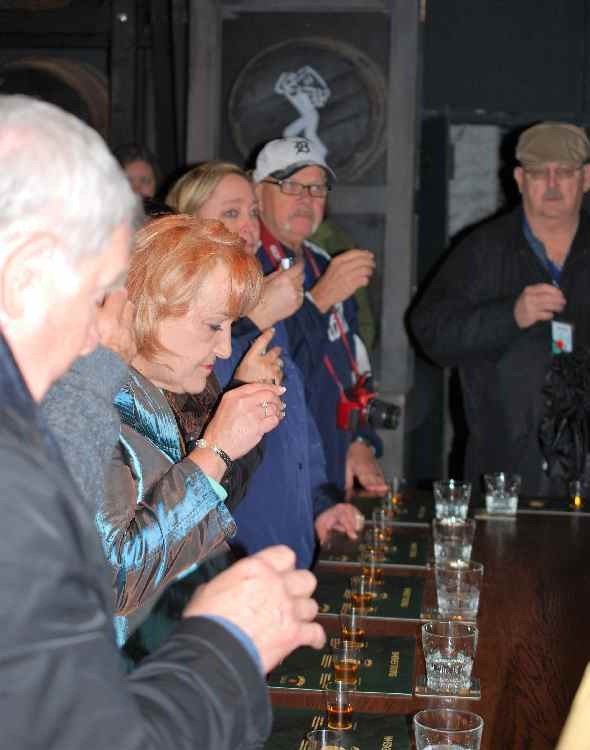 We then drove back to Cobh (Pronounced Cove) where we had the afternoon free. The port, which has had several Irish language names, was first called "Cove" ("The Cove of Cork") in 1750. It was renamed "Queenstown" in 1849 to commemorate a visit by Queen Victoria. No source has been identified for when the name was officially changed to Cobh, but it occurred around the time the Irish Free State was established. Cobh is a Gaelicisation of the English name Cove, and it shares the same pronunciation but has no meaning in the Irish language. After a little Murphy's stout which is brewed in Cork. We then headed to sea under sunny skies! 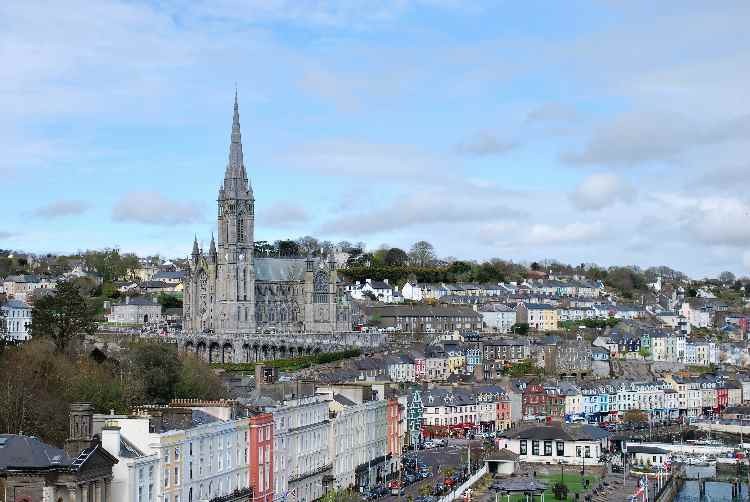 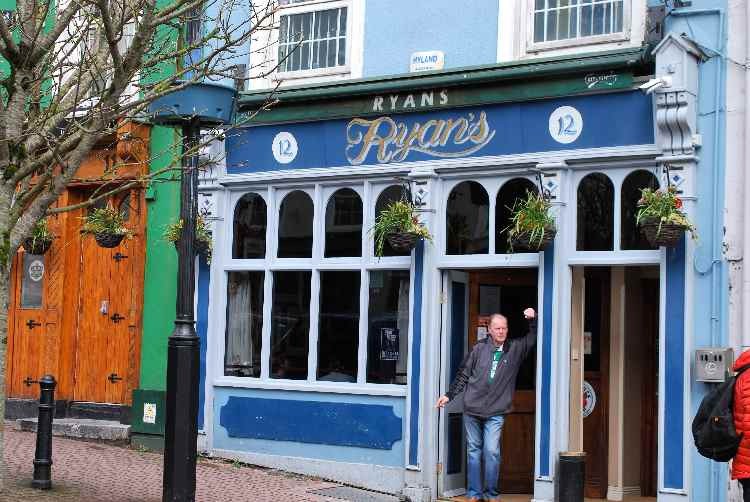 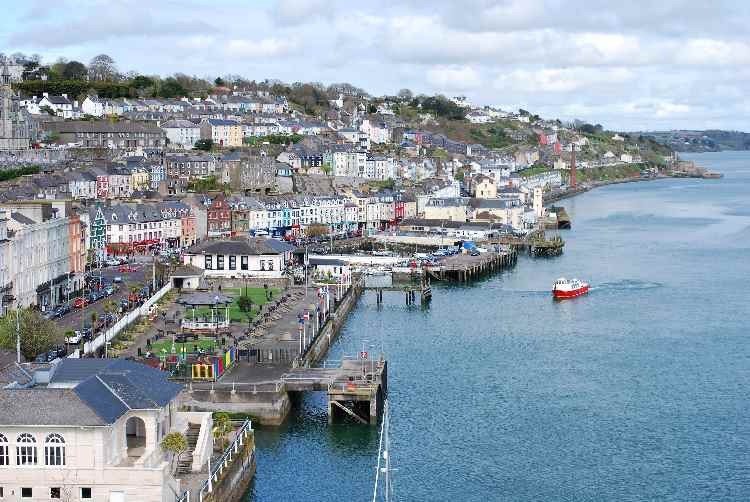 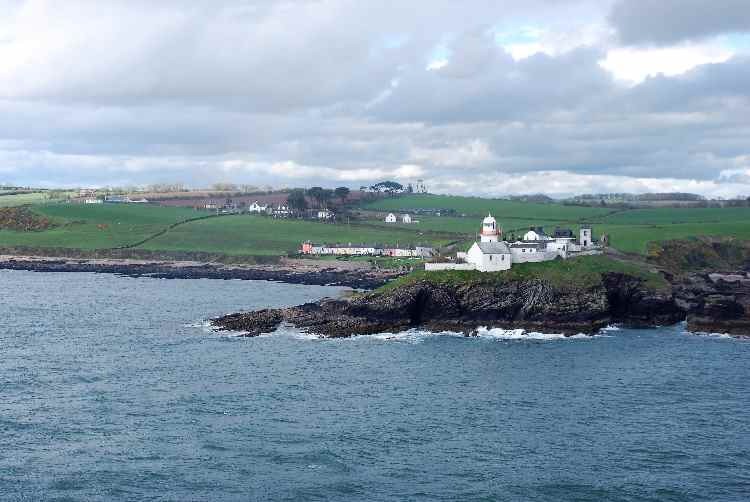 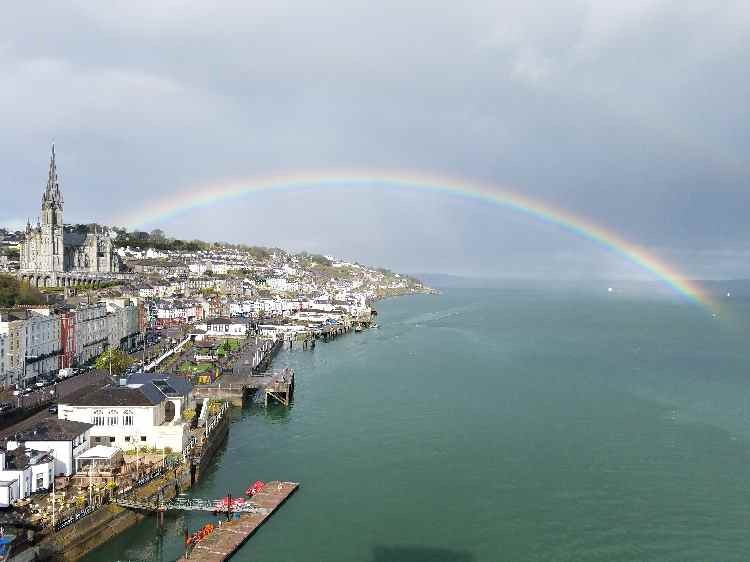 Our trip home was uneventful. One thing to keep in mind is that you should be at the Dublin Airport at least 3 hours in advance. Aer Lingus recommends that you arrive 3 hours 30 minutes in advance (terminal 2 for all international flights). There is a reasonable duty free shop, and you reclaim your VAT tax in the duty free area. Somewhat surprising is that you clear US customs and immigration in Dublin, so that you are spared that ordeal in your first US Airport. You will, however, have to re-screen through security.

Ireland was spectacular and well worth a trip there. The people are among the friendliest in the world and they are always looking for a way to help if you appear to be lost or confused. We found the food to be very good, and we relied on the recommendations of the front desk folks for good restaurants, and were never disappointed. Of particular note were the wonderful croissants for breakfast - the French would be envious (if that is possible).

Another amazing fact - in the twelve days we were on the island, it only rained as we were driving back to Dublin for our flight home. REALLY unusual, but well appreciated!

I don't recommend trying to do all the UK and Ireland in one trip unless you want to spend about 3 weeks or more overseas. England, Scotland and Ireland are three separate trips in order to give them the attention they require!

Submarine League Symposium in October
Two travel conventions in November
Allure of the Seas in December
Celebrity Equinox in January
Galapagos with Celebrity Xpeditions in March!

Waterford to the Dublin Airport

We woke up to some clouds, and for the first time since August 29th, we were faced with the possibility of some rain. Pretty amazing for this time of year. Our first visit was to the Waterford factory and showroom. This particular showroom was completed in the spring of 2010 and produces about 50,000 pieces per year. Other factories exist around the world. It was a fascinating process that was enjoyable. Of course I spent some money in the showroom. I shipped it home - they do it for 20 Euros with insurance. 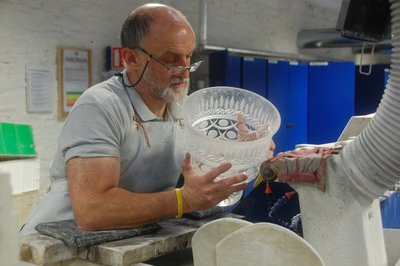 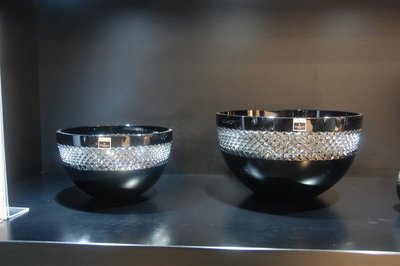 Then off to the Carlton Dublin Airport to wait for the flight home. We turned in the car and had driven 1697 km/1055 miles. What a wonderful journey! I will do a final wrap up of the flight home (with an overnight stay) and some comments - stay tuned!

After a nice dinner and some Irish music at one of the local pubs, we went to bed ready for another great day. From Killarney, we headed to our final town of Waterford. On the way, we had to take in the Blarney Castle and my two traveling mates had to kiss the Blarney Stone (I have kissed it twice already so I passed). It was another beautiful day. The Irish has now open the Victorian mansion that is part of the property, but our travel schedule precluded visiting that. We did have a nice lunch in the Stable Cafe though. 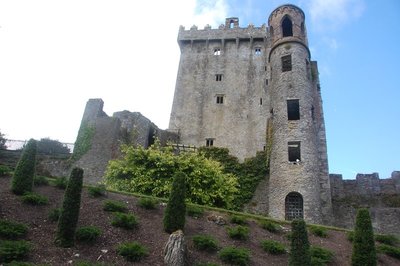 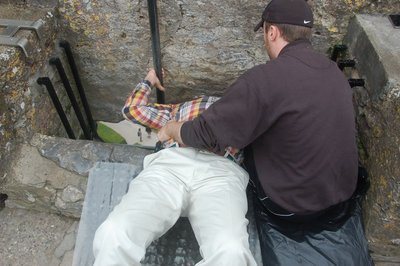 From Blarney, we headed to Cashin to view the Rock of Cashin - the 12th century Cathedral of St. Patrick. It is one of Ireland's more important historical landmarks and is really impressive. They a currently renovating about half of the Cathedral. 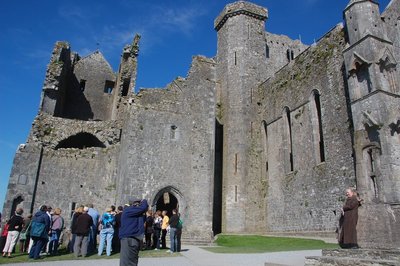 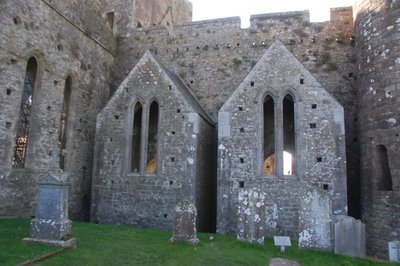 And then on to Waterford. A pretty long day - more than 170 km driven.

During breakfast, we were trying to decide whether to do the Ring of Kerry, pretty touristy and bussey, or go to Dingle and see the Dingle Peninsula. After reviewing Fodor's we decided on the Dingle Peninsula, as I have never been there before. On the way we stopped at a famine house, that showed what living conditions were like in the 1840's during the devastating potato famine. Dingle is wonderful little seaside village that was well worth seeing. We decided that we had made the right decision. 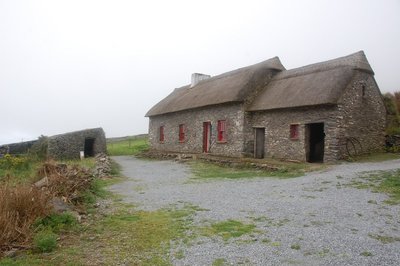 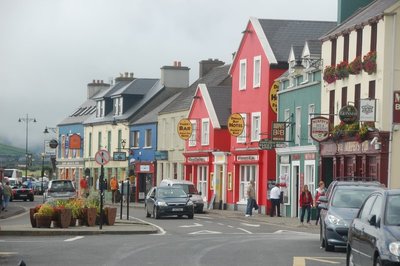 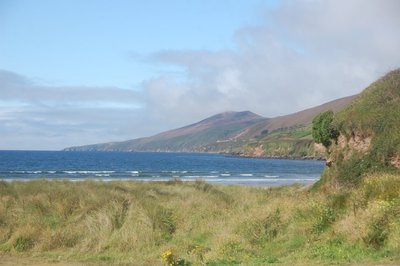