After the sobering reminder of man's inhumanity to man, we did our afternoon excursion to the Cambodian Royal Palace. The King was in residence, but did not invite us to tea. The palace is home to the Silver Pagoda - one of the most amazing Pagoda's in the world. No photography was allowed inside.

The Palace is a complex of buildings which serves as the royal residence of the king of Cambodia. Its full name in the Khmer language is Preah Barum Reachea Veang Chaktomuk Serei Mongkol. The Kings of Cambodia have occupied it since it was built in the 1860s, with a period of absence when the country came into turmoil during and after the reign of the Khmer Rouge. The palace was constructed between 1866 and 1870, after King Norodom relocated the royal capital from Oudong to Phnom Penh. It was built atop an old citadel called Banteay Kev. It faces approximately East and is situated at the Western bank of the cross division of the Tonle Sap River and the Mekong River called Chaktomuk (an allusion to Brahma).

The Silver Pagoda (vihara) houses many national treasures including many gold and jeweled Buddha statues. The most significant are a small green crystal Buddha (the "Emerald Buddha" of Cambodia), and a life-sized gold Maitreya Buddha commissioned by King Sisowath, weighing 90 kg and dressed in royal regalia and set with 9584 diamonds, the largest of which weighing 25 carats, created in the palace workshops during 1906 and 1907. During King Norodom Sihanouk's pre-Khmer Rouge reign, the Silver Pagoda was inlaid with more than 5,000 silver tiles and some of its outer facade was remodeled with Italian marble. 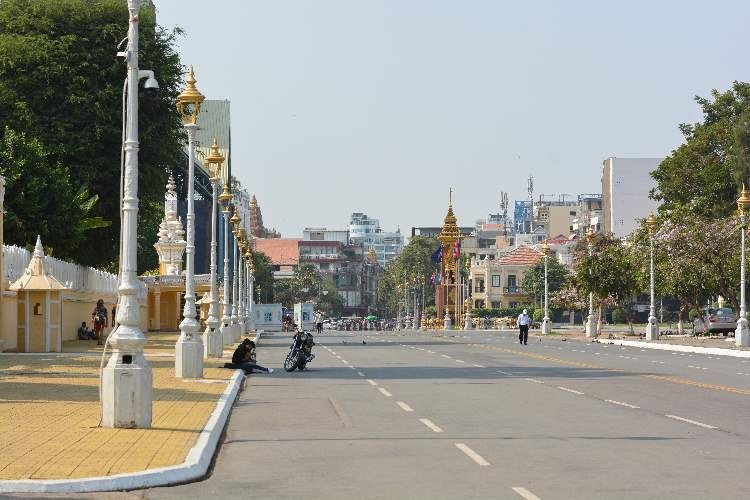 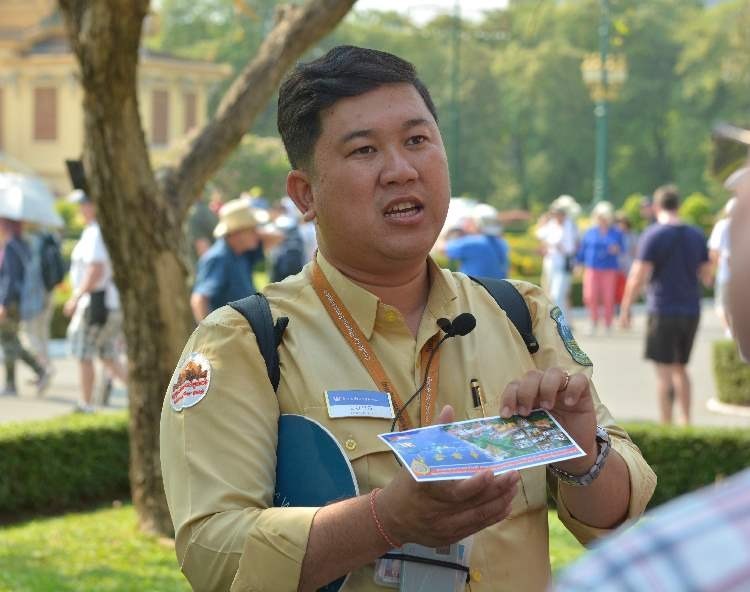 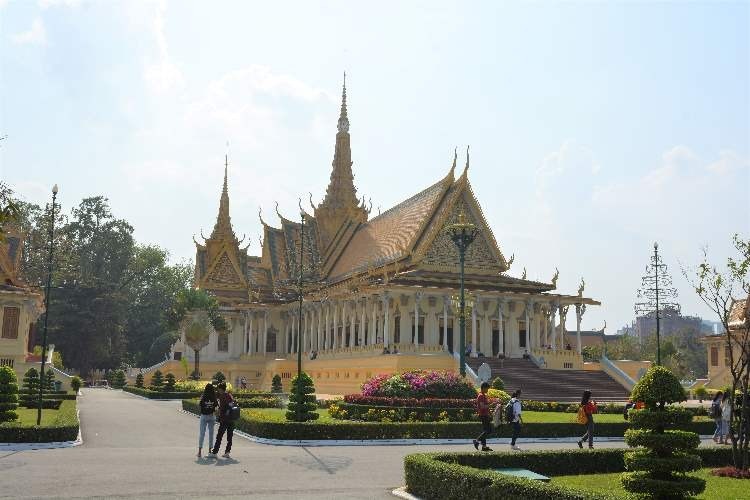 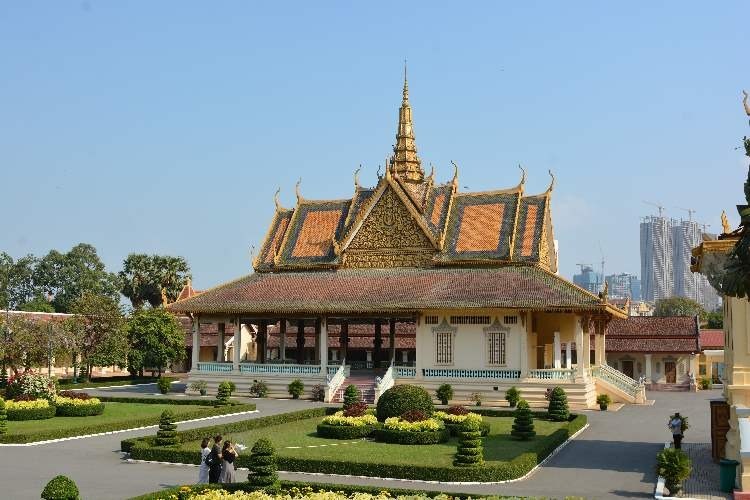 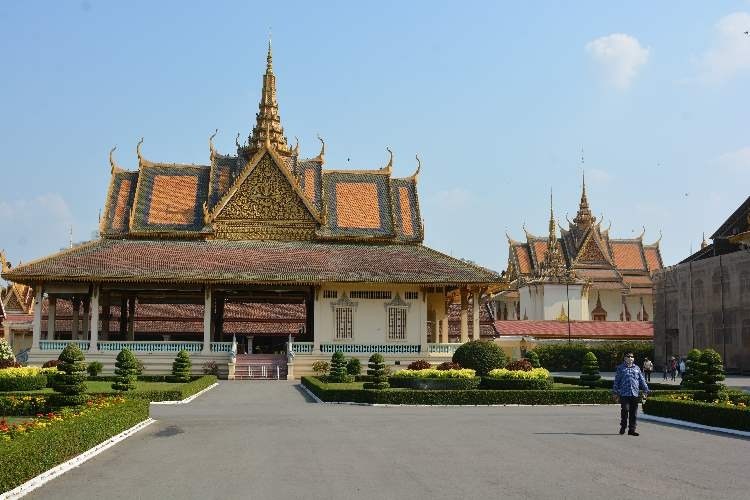 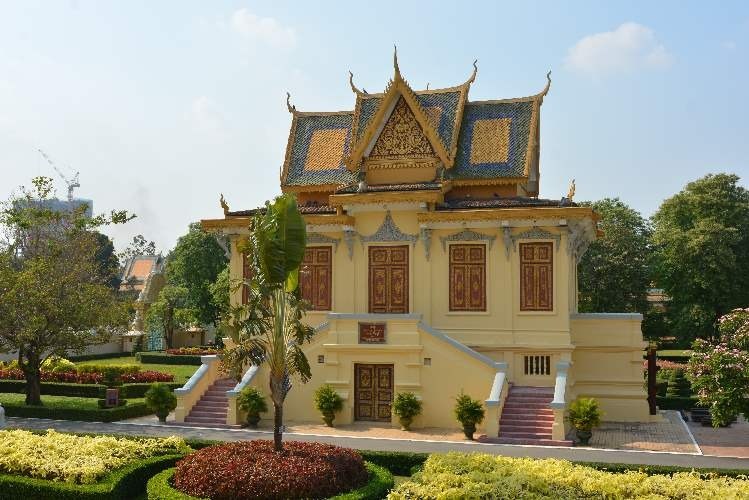 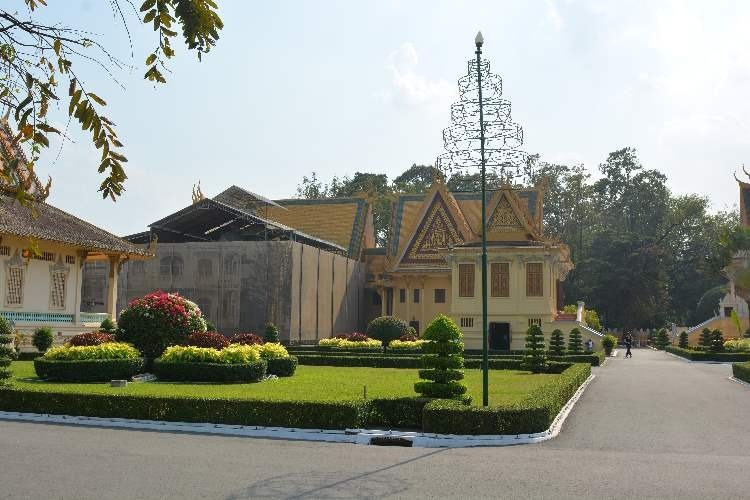 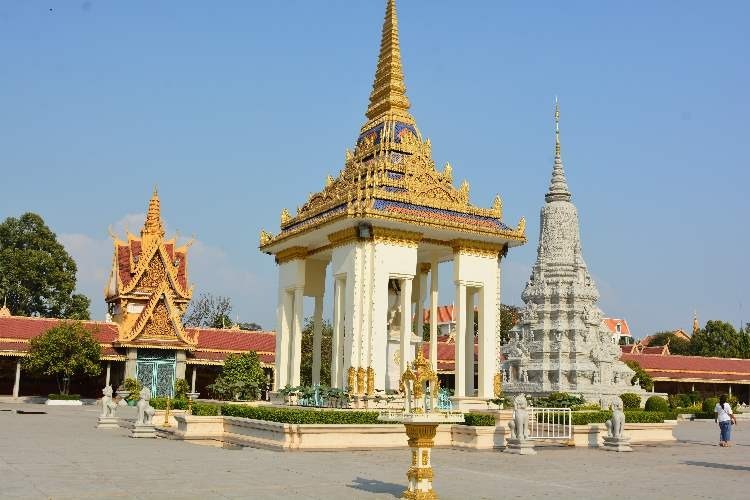 This afternoon, we boarded Tuk Tuks for a tour around the city and a stop at the Independence Square and the Norodam Sihanouk Statue.

The Independence Monument was built in 1958 to memorialize Cambodia's independence from France in 1953. It stands on the intersection of Norodom Boulevard and Sihanouk Boulevard in the centre of the city. It is in the form of a lotus-shaped stupa, of the style seen at the Khmer temple at Banteay Srei and other Khmer historical sites.

The Norodom Sihanouk Memorial is a monument commemorating former King Norodom Sihanouk. The bronze statue is 4.5 meters tall and is housed under a 27 meter high stupa in the park east of the Independence Monument. The statue is dedicated to Sihanouk's accomplishment on liberating the country on November 9, 1953 from French Protectorate in Cambodia. 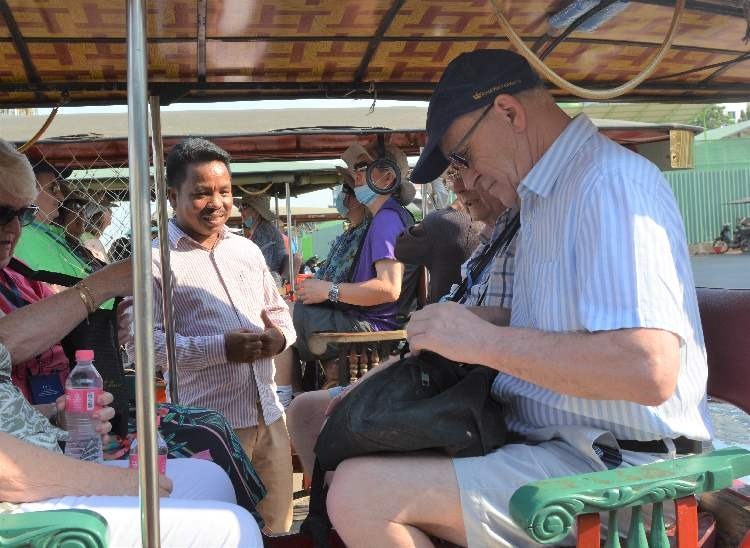 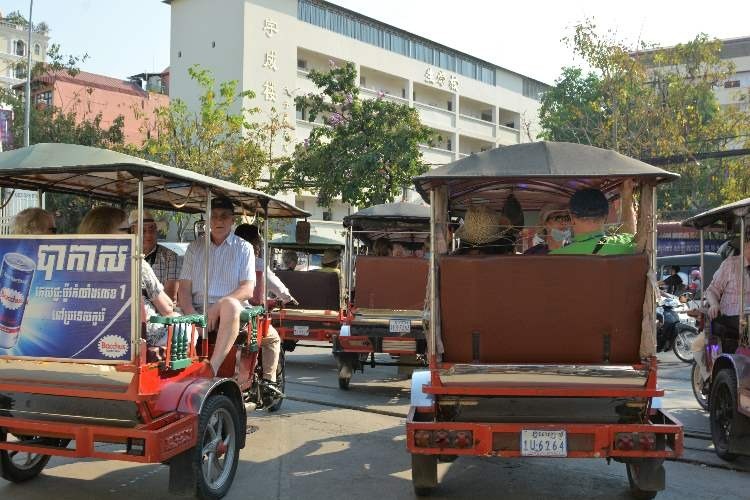 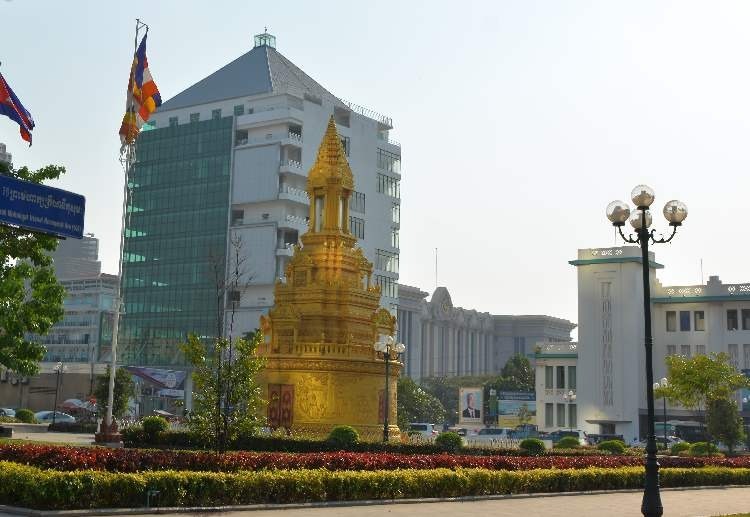 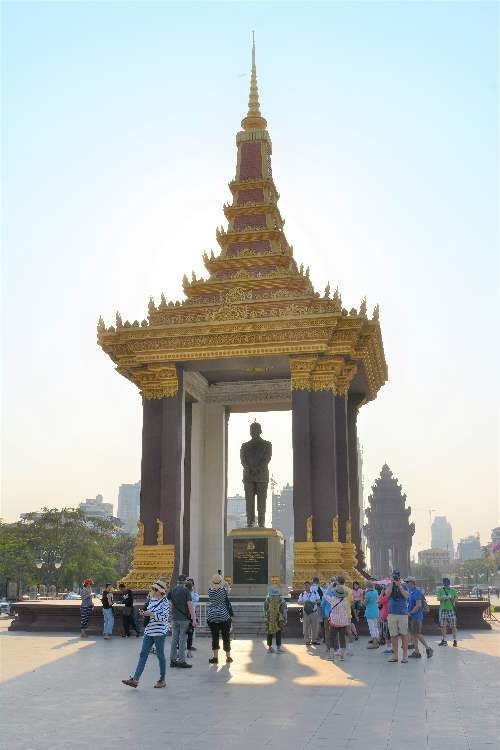 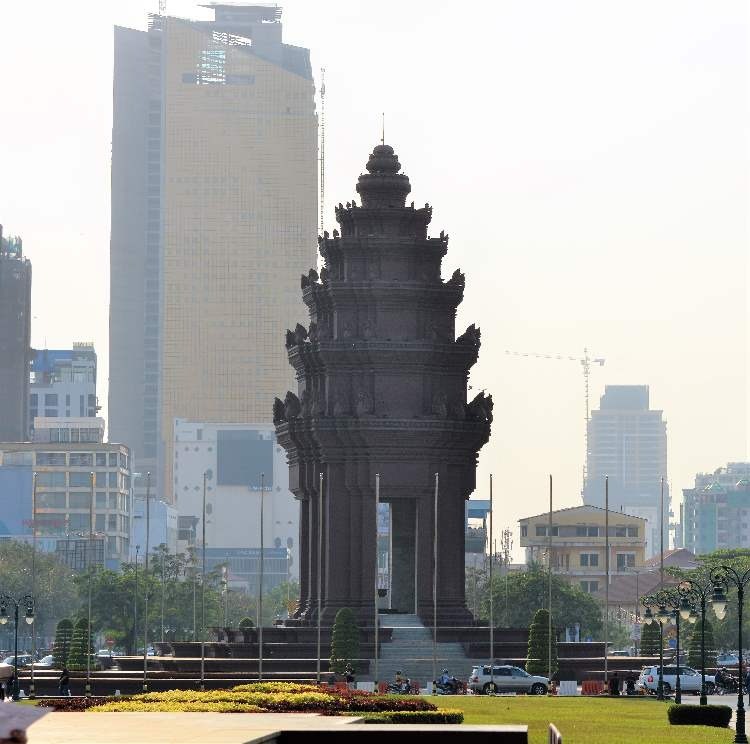 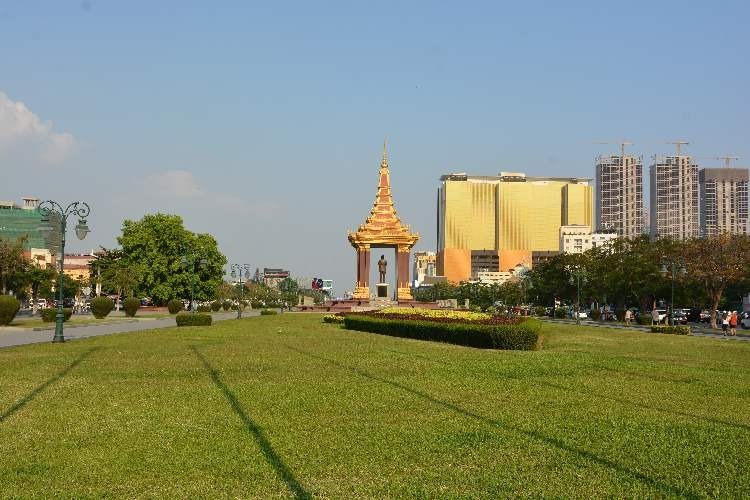 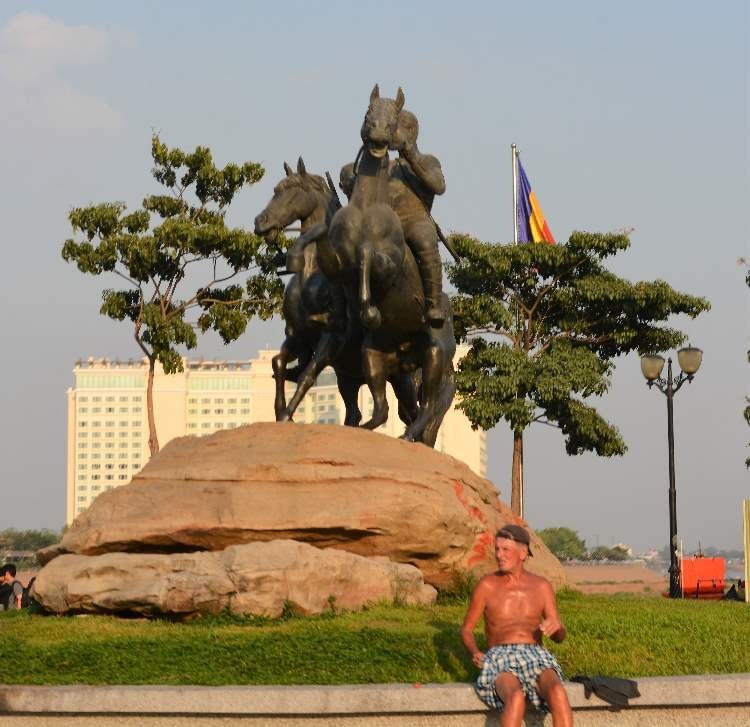